I stumbled upon this craft that was basically gluey yarn wrapped around a balloon. I have a lot of yarn lying around so I decided to give it a try. It was fun, in a messy, frustrating kind of way. If you decide to try it make sure you cover the floor really well, make sure there are no pets around, and make more of the mixture that you think you need. I ran out and had to make more half way through which was a big pain.

Step One: Blow up your balloons to whatever size you want the yarn balls to be. Don’t make them too big unless you are going for the balloon shape. Then hang them up somewhere with a tarp, or newspapers (or if you just recycled everything like me, old cardboard boxes)

Step Two: Mix plain white glue, water and corn starch. I really didn’t measure, but the websites I’ve found said a bottle of glue, 1/2 cup of corn starch and 1/4 cup of warm water. I put a lot more water because I didn’t have much glue. It didn’t seem to make a difference. 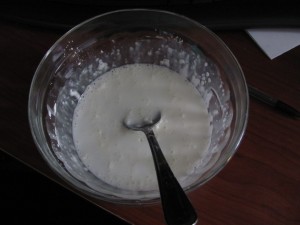 Step Three: Spread some vaseline on the balloons. This is as weird and gross as it sounds. I’m not sure if it was completely necessary, but it probably made things easier later on.

Step Four: Dunk your chosen yard into your glue mixture. I squeezed it out a little as I went to avoid clumps. Then wrap it around the balloon starting vertically and slowly going horizontally. This step was made much harder for me by Homer stealing my ball of yarn several times.

Step Five: Once it looks beautiful, cut the string and tuck the end under another part, preferably on top where it will be less visible.

Step Six: Leave it to dry. I left mine about 8 hours. It was stiff and dry. Leave it as long as you want though . Pop the balloons. Then wiggle the balloon skin out.

Step Seven: Some people spray paint them, but I liked my colours. Find a home for them! I hung mine from the weird wood overhang over the fireplace surround.

There was an error retrieving images from Instagram. An attempt will be remade in a few minutes.