Flowers proved to be one of the trickier parts of the wedding planning. I knew exactly what I wanted and had pinned all these gorgeous pictures of wild flower arrangements in mason jars, with plans to do the same thing. However, when I actually got around to inquiring about the prices of the flowers, I was shocked, $8 for one flower! Also, many of the flowers I wanted are unavailable in July. Darn.

So onto Plan B. About a week before I went around to all of the grocery stores and scouted who had the best flowers for good prices. Two days before the wedding I drove around to 3 stores and bought a bunch of bouquets. The night before I separated all of the flowers into piles and put them into a big bucket of water for the night.

The day of I arranged smaller bouquets and put them into the old bottles that I had previously spray painted. I put the bottles in clusters on the tables with the little mason jars I had glued lace to. I also put some in antique jars and put them on the gift and favour table.

I really loved that there was a large variety of flower types. This really made the tables cheery and colourful.
The flowers have lasted an amazingly long time. I now have them in vases all over the place and it is such a happy reminder of our day every time I see one.

The sun never shone, not even for a second. At one point it absolutely poured. The flowers all fell over in the wind. My hair did not co-operate. But none of that matters because on Saturday, I married my best friend and it was perfect.

Well tomorrow is the big day. Finally. I feel like we’ve been waiting forever for it. I’m trying not to sweat over the little things and to enjoy the moment. It will be beautiful, and unforgettable no matter what.

We have family and friends who came early to help set things up. There is food to be made, photos to be taken, tents to be pitched. So much planning and work have gone into this day. So much thought and imagining. And here it is, nearly here.

I’m excited to be marrying my best friend and I am nervous to be doing it in front of so many people. I am happy that so many wanted to come celebrate this moment with us, but I am worried we forgot something.

The day will proceed and at the end of it Kurt and I will be married and that is all that matters. That is what I will try to keep in mind through the stress and nerves!

There will be pictures next week!

This recipe is so simple it seems silly even to write about it, but it is my go to guacamole for when I want something fast and not too labour intensive. I do sometimes make a more complex guacamole, but this is my norm.

I take an avocado (or two or three, or whatever, depending on how much you want).Obviously you want to make sure it’s ripe (it should feel fairly soft). I cut it in half and take out the stone by whacking it with a knife then pulling it out. I squish each half a little bit in my hand (to help with mashing later), then scrape it out with the side of a fork. Once all of the avocado is in the bowl I mash it with the fork. I dice some onion and either just add it this way or put it through a garlic press to mash it up. I then add a little lime juice and a tiny bit of salt. Done. Unless you want to add cilantro or something else.

We eat this with tortilla chips, tacos, and homemade tortillas. Delicious, quick and healthy.

As I mentioned before, the food in Belize was a lot of beans and rice, which in my opinion, is great. We did try some different things though. I will try to highlight some of the best things we ate.

One of our best meals was definitely the lunch we made at the communal kitchen at our cabin. We went to the market that morning and bought fresh fruit and then went to the grocer in the village and bought some local cheese and fresh tortillas. It was fantastic.

Another cool thing we had was a fresh coconut. A man was selling them on the street. He would use a machete and make a hole in the top then stick in a straw. After Kurt had drank the coconut water (I didn’t like it), we had the man break it open and we scraped the stuff out from inside to eat. It was really good.

And of course our lobster dinner. We didn’t end up having it until our last night there. The lobster was fresh from that day and was absolutely delicious. It was very different from the lobster we’ve had on the East Coast, but I actually liked it better. It seemed meatier, though it was kind of freaky looking. 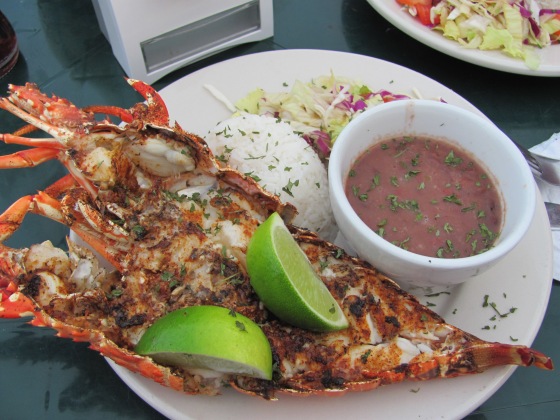 We ate well while we were away. For the most part the food was fresh and healthy, though slightly lacking in vegetables. Everything was complexly spiced, yet seemed so simple. Amazing. I really could eat rice, beans and tortillas every day.

While we were away the garden did surprisingly well. There was enough rain in the area to flood quite a few basements (ours was fine) so it seemed to make the plants happy. We were able to harvest a bunch more kale. Our strawberries are done, but the plants grew substantially. Sadly I only got to eat two strawberries since the rest were nibbled on by some creature and by the time were covered them in chicken wire they were done producing for the year. Our tomato plant has flowers and our pepper plants have tiny peppers. The beets had died from something, but they came back nicely while we were gone (making us think it was probably us killing them) and the potatoes, leeks and onions are huge. Harvest time should be pretty good! 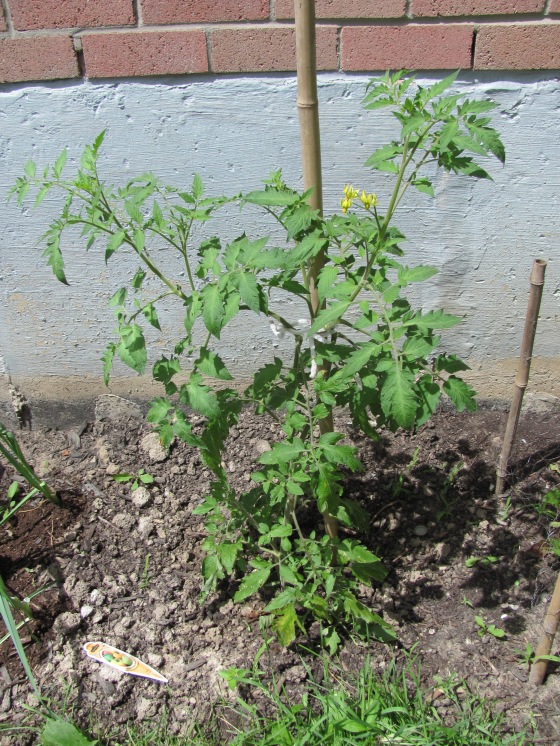 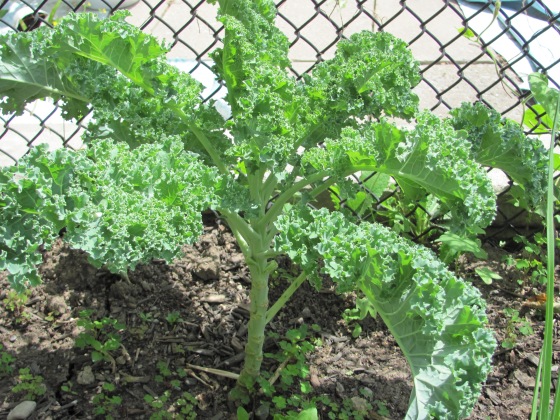 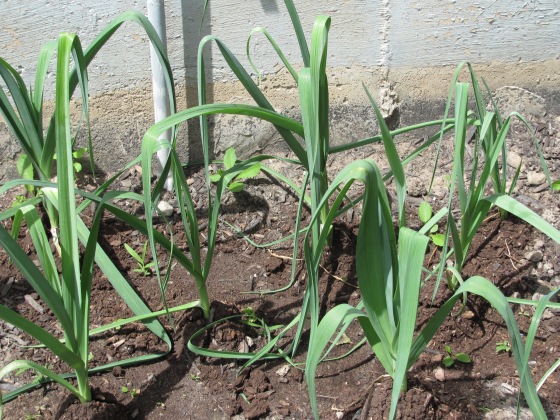 The rose bush that is growing in the yard looks great. I don’t usually like roses, but this one has no smell (which is a good thing to me and my sensitive nose) and it just looks so pretty with all of the flowers in full bloom that I can’t help but like it. The only thing that is behind is our lilies. Everywhere else in town is full of beautiful, colourful lilies (they seem to grow like weeds here), but ours only have a couple of flowers open. They should be all open next week, but we will be out of town and will miss it! I’m so glad we finally have a backyard of our own.

On our trip my drink of choice was definitely lime juice (which I’m going to attempt to make soon), but once in a while to change things up I would get an iced tea. It was always delicious. I’ve tried to recreate it as best I can though it’s not exactly the same. I’m not sure if the limes in our stores are the same ones in Central America and I’m also not exactly sure what kind of sugar they use. It’s kind of brown, but didn’t look quite like anything I could find (if anyone knows for sure, please let me know!). I used demerara.

Anyways, I picked up a bunch of limes from the grocery store. I’m not sure what kind, but they were dirt cheap. I washed them in diluted vinegar and then rinsed them well. I boiled a kettle full of water and steeped two tea bags. I used orange pekoe this time, but I’d love to try making this using different kinds of tea. As the tea steeped I made a simple syrup of half a cup of demerara sugar in about two cups of water. Use as much or little sugar you want depending. on how sweet you want it. Cook it on high, stirring constantly and take it off as soon as the sugar dissolves. I took the teabags out once the colour was to my liking, then poured the sugar water in. I added two sliced limes and ice.

It doesn’t taste exactly the same, but it is refreshing on a hot day!

There was an error retrieving images from Instagram. An attempt will be remade in a few minutes.